Communication problems are very common among couples seeking help for their relationship. Frequent arguments, fear of touching off a fight, heated exchanges, and avoidance of issues are all common complaints among couples I work with.

Communication problems can be confusing and discouraging but there is a way out of the fog. There are positive adjustments that couples can make in how they respond to each other that can make a big difference to their relationship.

The Balance Theory of Marriage

According to research by Dr. John Gottman, one of the foremost experts on what makes marriage work, happy and healthy couples demonstrate an optimal ratio of 5:1 positive to negative behaviors in their relationship.

In other words, when happy couples communicate, there are five times as many positive interactions between them (i.e. listening, validating the other person, using soft words, expressing appreciation, affirmation, physical affection, compliments, etc.) as there are negative (i.e. raising one’s voice, stating a complaint, or expressing one’s anger).

By contrast, among couples on the path toward divorce, this ratio is just under one to one. For every negative interaction there is less than one positive interaction.

Reflect for a minute on what ratio characterizes your conflicts. Is there respect? Is there kindness? Do you genuinely listen to each other? Do you soften your tone with each other? Are your intentions helpful and positive?

Over the past twenty-plus years Dr. Gottman has conducted an exhaustive and thorough study of married couples, seeking to understand what distinguishes couples who divorce from couples who create strong and vibrant relationships. Much of Gottman's earlier work, summarized in his first book What Makes Marriage Succeed or Fail?, highlighted the relationship between marital stability and how couples handle conflict with each other.

His more recent work, summarized in his book The Seven Principles for Making Marriage Work integrates his later findings about the importance of friendship and fondness as the primary factors that predict the health of a marriage. In other words, how spouses are with each other when they are not fighting is a telling measure of how they are with each other when they do fight and of the long-term viability of their relationship.

For purposes of our discussion about conflict and communication, however, let me outline some of Dr. Gottman's predictors of divorce that have to do with how couples communicate with each other about difficult issues.

Imagine starting off a discussion with your spouse about an issue that upsets you. If you are feeling frustrated and resentful your first uttered words might be harsh, sarcastic or critical. For example, "The trouble with you is ...," or "Why do you always have to be so selfish?" or "My problem with you is that you never ...." Notice the accusing and hostile tone of these words. Imagine the body language associated with the tone. This is what is called a harsh startup, meaning how you "started" discussing the issue was severe, sharp or accusing.

According to Gottman, ninety-six percent of the time a harsh startup predicts how the argument will end—negatively and without resolution. Once an argument starts off in a negative direction, it very rarely "rights" itself. Harsh start-ups are strongly associated with divorce and relationship break-up.

The Four Horseman of the Apocalypse

These are four hostile forms of communication that put couples at high risk for divorce when these patterns take up permanent residence in the relationship.

Normally, when you encounter a stressful and threatening situation, your body reacts in a way that helps you to deal with the danger. Your body temporarily shuts down non-essential systems, channels blood flow to your large muscles, creates extra fuel for energy, heightens your sensitivity to signs of danger and releases hormones that help you deal with stress.

Normally, this "fight-or-flight" response works well when we have to fight off an attacker, escape from a burning house, or perform a miraculous feat of strength. The problem is that it also impairs our ability to process information and to think clearly before we speak—exactly the abilities we need to have in order to work through difficult areas of disagreement with our spouse.

John Gottman has a vivid word for this physiological "fight-or-flight" reaction. He calls it "flooding." Flooding occurs when you and your spouse get into hostile arguments where the Four Horseman (criticism, contempt, defensiveness, and stonewalling) are allowed free reign in your relationship.

Physical signs of flooding include rapid heart rate (above 100BPM), high blood pressure, sweating, and the overwhelming urge to leave or to say something hurtful. When we become flooded, we operate mainly from a self-preservation mindset. We seek mainly to protect ourselves from the turmoil of an escalating argument, either by becoming aggressive (verbally or physically) or by trying to get away.

In distressed marriages, we commonly find habitual harsh startups by the wife combined with frequent flooding and subsequent stonewalling by the husband. This common pattern leads to a vicious communication cycle where one partner repeatedly complains, nags, criticizes and blames her spouse, while the other person repeatedly avoids, withdraws, stonewalls, or dismisses his partner. The withdrawn spouse might initially respond by counterattacking or by being defensive but eventually he switches to withdrawal in order to avoid being overwhelmed.

It becomes a cycle because the more the husband withdraws and avoids his wife, the more frustrated and resentful she becomes. Eventually the resentment comes out as criticism and blame, which leaves her husband feeling unappreciated and overwhelmed, and so he avoids her more, so her resentment continues to build, and on it goes. Sometimes the pattern is reversed and it is the wife who withdraws and the husband who pursues.

This vicious cycle is maintained by each spouse's reaction to the other person, and by their respective fear-based focus on self-preservation. It is important to note that their reactions, on a core level, are really attempted solutions to difficult situations; but each person's "solution" fuels the flames instead of extinguishing them.

Repair attempts are efforts to de-escalate conflict and avoid flooding. Repair attempts are words, phrases, or responses intended to soften the conflict, to get things back on track, to start over, or to acknowledge or recognize the other person's view. For example, "I'm sorry," or "I see your point," or "Please don't raise your voice with me," or "Maybe we can compromise," or "That's not what I meant."

Distressed couples are often so ruled by negative intentions and the desire to protect themselves or to hurt the other person, that they either ignore or do not recognize each other's repair attempts. In happy marriages, spouses make fewer repair attempts, but that is because the ones they do make are received. They work.

When couples stop responding to each other's attempts to de-escalate the conflict, when they use the Four Horseman on a habitual basis, when they become frequently flooded, until one or both partners withdraw without resolution of the conflict, then the marriage will become a source of pain and torment rather than comfort and support. Where repair attempts are repeatedly failing, and the Four Horseman are habitually present, Gottman found that over 90% of couples will eventually divorce.

What determines whether repair attempts will succeed or fail? The strength of the marital friendship and how positively each partner feels about the other. This is why it is so important to focus on building friendship, positive sentiment and goodwill toward each other. Friendship, goodwill and fondness become the foundation for effectively using communication and conflict resolution skills.

If you have been married for some time and you recognize some of these signs in your own relationship, don't be discouraged. As long as you are willing to make conscious efforts and you are committed to your relationship these negative patterns can be reversed.

If you are fairly new as a couple, start now to build mutual respect and goodwill into your relationship and learn how to protect your relationship from these corrosive behaviors ever taking hold in the first place.

Time and space don't permit a full discussion about how to turn things around, but let me offer a brief summary of principles that can stop or help prevent these negative communication behaviors from consuming your relationship. Some of these principles are inspired by Gottman's work mixed in with my own clinical experience.

The Seven Principles for Making Marriage Work: A Practical Guide from the Country's Foremost Relationship Expert

This book is the culmination of decades of research. It's about building friendship, enhancing love, cultivating warmth and mutual respect, and learning to handle conflict without damaging the relationship. Well-written and relevant with lots of very practical exercises and quizzes. Watch for a new edition coming out this May.

In Canada? Click here to order from Amazon.ca instead 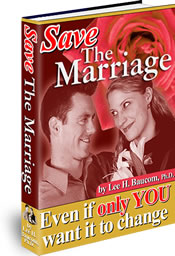 Save The Marriage
by Dr. Lee Baucom

For over 15 years Dr. Lee Baucom has offered this well-written and helpful e-book for couples seeking to transform their marriage, even when only one person wants to work on it. Downloadable to your computer in ten minutes this is an excellent resource to help you shift the momentum in your relationship.

For more information or to book an appointment

If you would like to talk with one of our counsellors in person about the topic of this article, it is very easy to book an appointment by calling (403) 255-8577 or using our easy online scheduler here.

If you have any questions or would like to contact us by email, you can complete a brief confidential contact form here. Once you submit the contact form, a Cobb & Associates intake staff member will respond as soon as possible.

We are currently accepting new clients and warmly welcome self-referrals and referrals from physicians and other professionals.

We appreciate your interest in our services and hope this information has been helpful to you. Please do not hesitate to call if you have any questions.

External Content and Diagnosis Disclaimer: Cobb & Associates Inc. gives no direct or implied assurance that the content on an any external websites listed on this page is 100% accurate or credible. This determination must be made by individual consumers of online information. In addition, the information on this page is intended for educational purposes only and is not meant to be used for diagnosis or treatment. If you suspect that you are experiencing the type of difficulties described in this article, we strongly advise that you consult with a health professional.

Affiliate Disclaimer: Some of the links to resources listed on this site are affiliate links, including the resource listed on this page. This means that if you click on a link pointing to a vendor on this page and you subsequently purchase any product from that vendor, Cobb & Associates Inc. will receive a percentage of that sale. Please know that we will only review and recommend products that we feel are of high quality and value to the reader. If any product we find on the internet is not of high quality it will not be reviewed on this site. Cobb & Associates was not offered this product for free in exchange for a review. Affiliate commissions are one method we use to offset marketing costs and are not a significant source of income for Cobb & Associates.

Direct billing to your insurance
company may be available.
Please check with our front desk staff.

These brief 3-minute videos featuring Diane Gibson, of Cobb & Associates Inc. aired on Monday March 17, 2014 and Monday September 22, 2014 on Global Morning News. Click below to see what Diane has to say on the topic of step-parenting and bonding with a step-child.

A Selection of Articles

Why Goodwill is Essential to Good Communication

How to Stop Arguing and Shift to More Productive Dialogue

How Can I Be a Better Listener?